With any new OTT service—and even among the OTT behemoths that have been around the block a few times—the focus is often on acquiring new users. But what then? It doesn’t matter how many new users you acquire if they churn after their free trial. We spoke with Jason Wong, Product Director SVOD at Cleeng, a Brightcove partner that manages OTT churn, to find out what separates the success story from the flash-in-the-pan.

"With top-tier media companies racing ahead to create the best immersive OTT experience, those organisations who embrace churn reduction analytics and optimise subscriber retention stand to become the leaders in their respective market,” says Wong.

So how do you go about identifying your churn rate? And once you know it, how do you keep it at a reasonable level? Let’s start with the basics and work our way up from there.

What is OTT churn rate?

Churn rate is simply the number of OTT service subscribers that cancel, or let their subscription lapse. They fall into one of two categories:

The first step in identifying your churn rate is examining your subscriber management dashboard and separating voluntary churn from involuntary churn. The methods that you take to address each category will be vastly different. 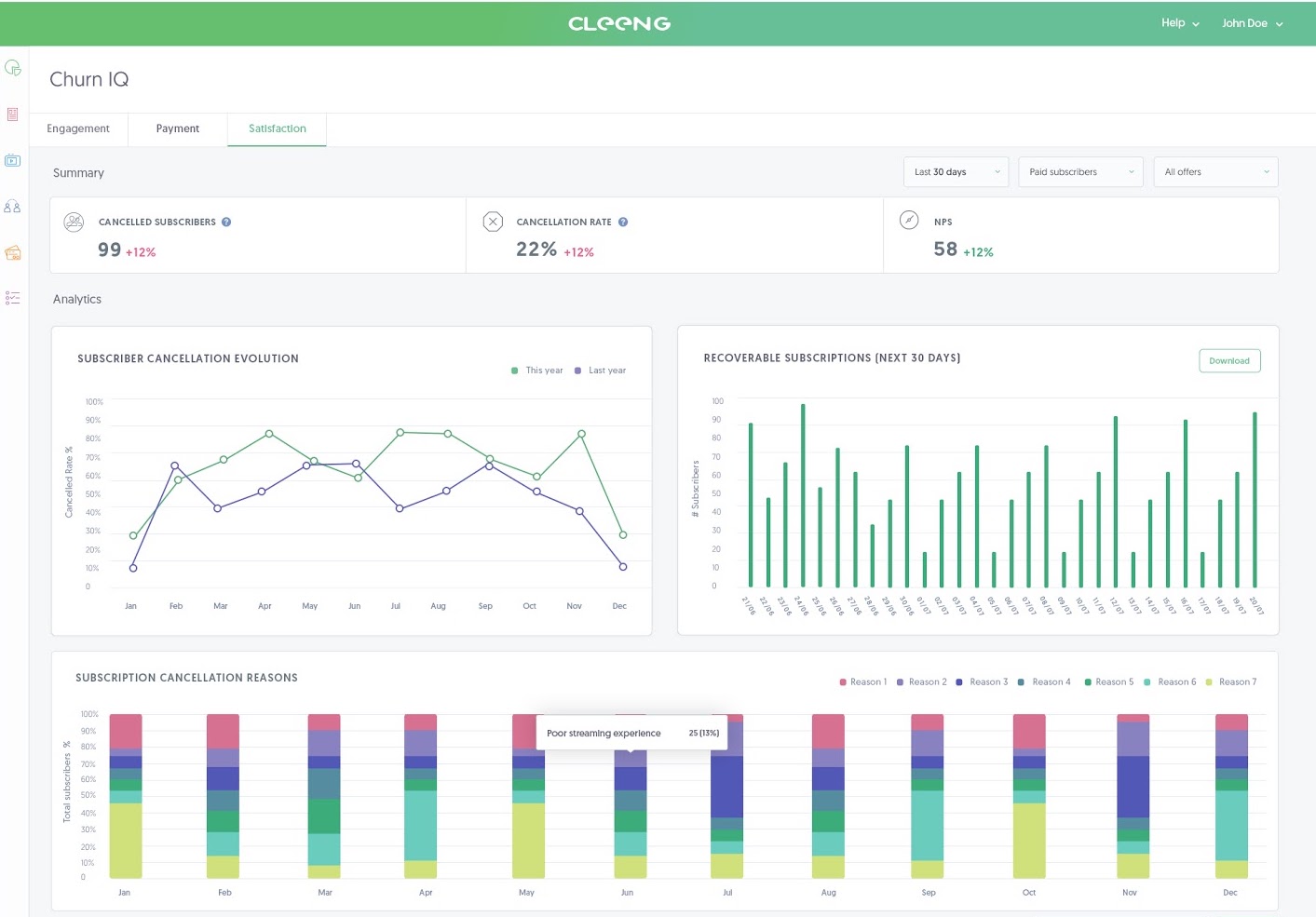 But there’s much more to understanding churn than identifying the immediate reason. Providers also need to compare their user acquisition, or conversion rate, with their churn rate on a month-over-month basis in order to know where to focus their efforts. If the churn trend month-over-month is steady and reasonable—in other words, you’re retaining most of your existing users—you’re free to focus on acquiring new users. However, if churn is trending up—let’s say toward 20 percent—you’ve got a problem on your hands.

Deeper analytics can provide helpful insights that drive more informed actions. The most successful OTT providers know everything about their viewer demographics and have them sorted into audience segments. Stay-at-home moms have a different user experience than pro athletes; users who binge-watch series after series have a different user experience than the Netflix-and-chill weekend warriors. Knowing your audience, and how each segment is performing compared to the others, is priceless insight.. Advanced analytics partners can help OTT providers better parse those numbers; for example, a solution like Cleeng’s Churn IQ illuminates audience data plus video engagement metrics.

Once you’ve got a handle on the data, it’s time to take action.

The easiest way to reduce involuntary churn is to partner with a service that automates the process. For example, users are notified when their payment on file is nearing expiration, so they can make an update without a lapse in their subscription. Some services take it a step further by communicating with the banking system on the back end to automatically update credit card information when a new card is issued.

Changes like these may seem small—but reducing churn by even one or two percentage points can have a massive impact on revenue down the line.

Unsurprisingly, numbers come into play again as you decide how to tackle voluntary churn. If video engagement is poor—for example, users are abandoning videos halfway through—maybe you need to improve the content. On the other hand, if users are coming to the app and abandoning it without starting any videos at all, that tells you something about user experience. How about users that go for long stretches of time without opening the app at all? In that case, maybe the answer is push notifications that reel them back in.

How to compete with the big guys

When Netflix raised prices last week for the first time in years, the entire media industry took note. Would Netflix’s giant base of loyal subscribers find the added expense too much and abandon ship? Or is the original OTT behemoth strong enough to charge what they please?

The answer remains to be seen, but one thing is for sure—consumers have a limited tolerance for subscriptions. The average OTT user has the capacity and budget to absorb one to five subscription services per month, with majority of users signed up for no more than three. Of those three to five subscriptions, Netflix, Hulu, and Amazon Prime (and eventually NBC and Disney’s OTT offerings) probably take up the main spots, leaving little room for niche providers. With prices on the rise, consumers will be squeezed even further. OTT providers will have to provide something truly special to earn a loyal and passionate audience that will stick by them when the big guys are demanding more and more of their hard-earned entertainment budget.

In the rush to stand up a new OTT service, customer acquisition models can take precedence over churn management. But if providers aren’t practicing churn management from Day 1, they’re already behind.

“Churn must be a high priority for large organisations to tackle,” says Wong. “They must bring focus and unity to a challenge that's shared between multiple parts of the organization such as video streaming, content acquisition, customer success, the payment processing team and more."

Ready to take a deep dive into the world of churn? Cleeng has published an ebook called Getting a Grip on OTT Churn so you can do just that.

Read it
About the author
Paul Brickel
Paul Brickel is the Director of Product Management, OTT Solutions at Brightcove. He has extensive product management and marketing experience helping media organizations navigate the digital landscape and deliver market leading solutions.