At Brightcove we’re fortunate enough to work in an exciting industry that thrives on innovation and creativity in order to help publishers engage their audiences. Over the last year we’ve seen this energy culminate into a new medium: 360 degree content. An immersive experience that drives interactions for all types of content, including sports, tourism, real estate and entertainment.

Now, through a brand new set of Video Cloud integrations, you too can easily bring the 360 experience to your native iOS and Android applications.

Getting Started with 360 Video

The first step towards offering a 360 experience will of course be to go out and generate the content. The videos you’ll see in this post were all generated from my own experiments with the Ricoh Theta S. However, regardless of your hardware choices the important part is that you’re grabbing high quality video that keeps your viewers’ attention.

My recorder in particular uses two cameras that capture a sphere of video on either side of the device. Directly playing back the MP4 that this generates, you’ll see two “fisheye” views of content which correspond to the camera inputs:

The device you’re using might not produce a fisheye source and that’s OK because it’s the next step that’s important. We have to turn this intermediary source into a recognized 360 video format that our client side players will be able to use later on. For this we recommend the current standard, equirectangular format. In my case, Ricoh provides an application which performs this conversion for me and the end result looks like:

Equirectangular format is simply the entirety of the 360 video mapped to fit a rectangular space. With a little bit of love and a whole lot of code magic, our client side players can interpret this stream to then deliver the desired 360 experience.

When a consumer views your 360 video, they are only viewing a portion of the actual video at any given point in time. 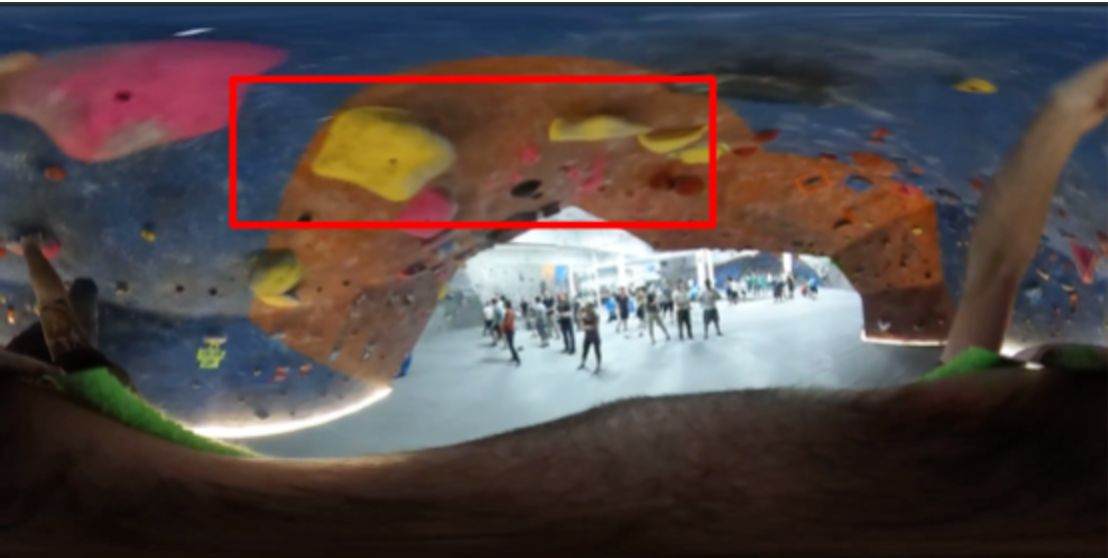 As a result, you should use only high resolution renditions. We recommend you choose the highest rendition settings possible for your uploads, the default “single-bitrate-high” ingest profile. Aside from wanting to force a high video bitrate, there are no differences between ingesting 360 content and your other videos into Video Cloud.

Once you have ingested your content you’ll need to mark it as a 360 Video either through the Video Cloud Studio or if you prefer to automate the process, via a CMS API video update request by setting the projection property to ”equirectangular”. This metadata will help you keep track of your content, but will also help the Brightcove players know how to handle content they’re being asked to play.

With your 360 content now living in the cloud you’re ready to grab hold of viewers around the world. However, without the proper client side technology you’re left with the equirectangular format seen above.

The Brightcove Native Player SDKs for iOS and Android have been upgraded to automatically detect that 360 video is coming back from Video Cloud and if you're hosting your content elsewhere, you'll just need to tell us that the incoming source is 360 video so we know to handle it appropriately. In both cases the SDK provides an out of the box user interface which allows viewers to enjoy 360 content in all three modes they have come to expect:

To navigate the content users can drag with a finger, tilt the device, or through the press of a button switch to split screen mode which supports VR headsets such as Google Cardboard.

As a part of our documentation efforts we strive to provide sample applications to make any integration process even easier. Checkout the open source sample apps for both iOS and Android for free demos of how these features can work for you!

We can’t wait to see the experiences you deliver with these new features combined with the flexibility of the Brightcove Native Player SDKs. Check out our support documentation to learn more and get started.

About the author
Stewart Glass
Software Engineer gone rogue, Stewart leads Product Management for the Brightcove Native Player SDKs and Video Cloud Catalog APIs. With over 5 years at Brightcove Stewart has been involved in just about every corner of Video Cloud and as a Product Manager aims to bring his passion and enthusiasm to Brightcove's application and API communities.