In an interesting juxtaposition of roles, Jim Wilson, a principal software engineer at Brightcove, is straddling the line between the worlds of online video and print publishing. As part of the end user experience team at Brightcove, Jim helps develop the features and functionality that allow viewers to easily interact with Brightcove’s Video Cloud Smart Players on devices and screens of all types. He has also become a published author with the recent release of “Seven Databases in Seven Weeks: A Guide to Modern Databases and the NoSQL Movement,” a book he co-wrote with his good friend, Eric Redmond.

Jim’s goal in writing the book was to clarify what he felt were the many misunderstandings surrounding NoSQL, or database systems that are based on something other than relational database management system (RDBMS) models. “My hope was that readers could apply what they learned from the book to their own thinking around databases,” said Jim, “to better understand how usage patterns can be used to select a database that best fits particular requirements.” 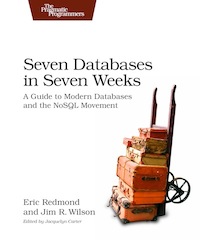 The publishing process turned out to be as much of a learning experience for Jim as the one he intended for the book’s readers. “Starting off, I thought it would be fairly easy to write the book,” he explained. “The plan was to introduce each of the seven databases and develop a nice overview of each one.”

Soon after getting underway, however, he discovered the need to become an expert on each of the databases and related topics. “Ultimately, it was like trying to write seven different books and then compile them into one.”

One of the key takeaways Jim hopes Seven Databases in Seven Weeks readers finish the book with is a greater understanding of how processing works with data. “It’s knowledge that I apply to my job at Brightcove as well,” Jim noted. “Whether you’re building databases or working for a cloud services provider, it’s important to know where to put the data in relation to the processing and how distributed processing can affect a system’s overall performance.”

Working at Brightcove, Jim is also keenly aware of the vital role that video plays as part of the overall marketing mix. To promote the book, he produced the music video, "Seven Databases in Song," which can be seen below.

Published in May, “Seven Databases in Seven Weeks” is available as a paper book or ebook at from The Pragmatic Bookshelf.