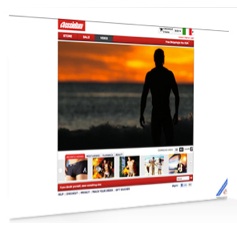 Traditionally, high quality online video was the domain of large media organizations. But, this notion has been changing rapidly as non-media companies seize the opportunity that ubiquitous broadband Internet connections offer.

Iconic Australian men’s underwear brand, aussieBum, is a prime example of a new breed of retailers embracing online video as part of their e-Commerce strategy. Founded in 2001, the company cleverly manages to capture the Australian dream and its promise of beaches, sunshine and a ‘no worries’ lifestyle in its popular apparel fashions for men.

Over time, online video has evolved into such a key element of its e-Commerce strategy that it has become the channel of choice for new product launches.

aussieBum’s incredibly successful WJPro launch exemplifies how video boosts sales with digital word of mouth. A variation of the original aussieBum WonderJock, WJPro was introduced with a new online video that went live on aussieBum’s site on a Friday afternoon. The impact was almost instantaneous. Over the weekend, sales had reached half a million dollars.

“We chose Brightcove’s Video Cloud because it is the best product in the market,” said Kiah Roache-Turner, Head of Digital Media Production at aussieBum. “Not only is the product convincing, but Brightcove’s local sales and support teams have extensive experience in helping business augment their e-Commerce strategy with online video as well.”
Read more

And, by the way, B&T, a leading Australian digital agency publication, enjoyed aussieBum's online video success as much as we did. They decided to feature aussieBum in their feature story  sites/all/uploads/B&T_22July11(1).pdf.

About the author
Alyssa Chew-Nair