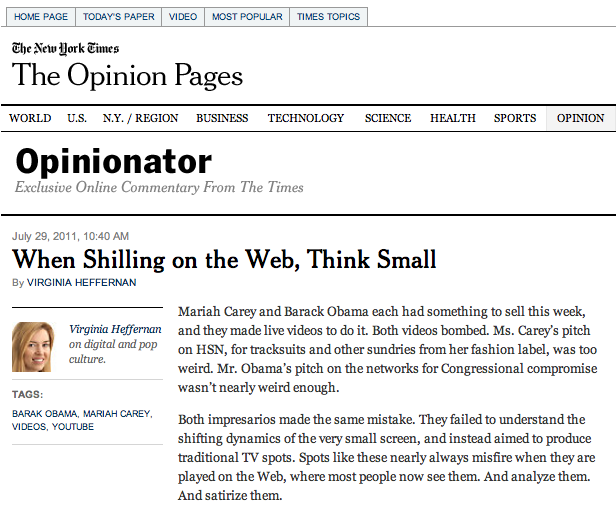 I've always been deeply interested in the ways different technologies and interfaces dictate and influence user behaviors, so I was excited to see Virginia Heffernan's latest New York Times op-ed addressing medium specificity and its role in the success of online videos. She critiques recent efforts from Mariah Carey and President Obama, suggesting that their videos were too entrenched in a made-for-TV style that prevents them from engaging web watchers.

While I agree that web video certainly has its own set of unique stylistic characteristics that are generally agreed upon (short, funny, sometimes sensationalized for maximum-viral-impact), I also believe that video made for traditional distribution methods (TV, movies, etc) can also do well online. A Volkswagen Superbowl commercial can perform just as well--if not better--online as it does on television.

Heffernan suggests that what makes web video so unique is the way it expects engagement from viewers. She writes, "Online video requires drastically different media skills because it is consumed in a highly specific way, particularly on YouTube. People don’t 'watch' online video like they watch television. They 'play' it. That’s not just semantics." Online viewing is an active process where viewing is only the first step, with the potential for follow on actions like sharing content that holds cultural currency, or remixing content that inspires creative repurposing.

But what Heffernan omits is the fact that online video as a category and delivery mechanism now represents a very diverse ecosystem, where behaviors can vary greatly depending on the device and platform that delivers the video. If we're talking in terms of medium-specificity, web video itself is not a specific enough medium anymore. It's too many different things, each with different associated practices, formats, behaviors, and meanings: think YouTube, Vimeo, Hulu, Netflix streaming, and the list goes on and on. And it's delivered to too many different devices, all with different associated viewing habits and behaviors contingent upon the device or interface. Watching a YouTube video on a browser with various windows and tabs open is a lot different (namely more distracted) than watching the same video on an iPad via the YouTube app in a more lean-back mode. Therefore, web video itself is not a medium that can be approached whollistically with any specificity as she suggests, but rather the intended device or interface delivering online video is the medium more directly tied to these McLuhan-esque specific characteristics she's looking for. In this sense, her op-ed addresses only a small piece of the online video world: that of distracted, interactive YouTube-like viewing experience. In arguing for more subtle attention to the medium specificity of online video, she misses the bigger point that online video has evolved to encompass so many different media that it can no longer be treated as one type of media with one set of specific traits. So, to "grant the Internet such singularity" is a a step too far for me.

Instead, we should think about medium-specificity for online video in terms of platforms, devices, and content aims. That results in thinking about video in terms of device-specificity, or viewing-mode-specificity (active v. passive or leanback, for example). Thankfully, platform analytics showing audience devices, operating systems, and browsers flesh out some of those user experience details to give producers a better sense of their target audiences. Drop off rates can give indications of weak spots where viewers lose interest to inform editorial choices.

If we think about rules of thumb for different types of video, Heffernan's focus in this piece is on "schilling" with video. She argues that ideas or products being sold or pitched on the web require a certain finesse with the form to engage users. So perhaps that should be a guiding rule of thumb for transferring longer form content for anything that's not a full-length episode to the web: shorter is better, put key ideas right up front. Content producers should be repurposing, re-editing, and remixing their content to reach audiences in ways that are uniquely appropriate to every interface that content reaches viewers. Perhaps that means there's a mobile version, a tablet or set-top box version, and YouTube version, and a full-length version of the same piece, all edited and stylized to match the medium-specific formal rules of thumb.

But editing with an eye toward medium specificity doesn't mean we should be dropping all web video down to the lowest common denominator of engagement. The web is a place for ideas, with plenty of room for more lengthy, nuanced arguments--that's true for text and for video alike. I would hate to see everything cut down to the sound bite, viral version. Instead, I would lobby for a combined approach: there's a time for the short version edited for succinctness and clarity, and a time for the long version for those that are more interested to engage fully with an idea or learn more about a product. Think of it as the relationship between a movie and its trailer: skillful editing is required to pique viewers' interest, to give viewers a taste of the main thesis, of style, of basic plot points, but it's only a stand-in or advertisement for the feature film. I believe there are plenty of opportunities where long form can co-exist with more sensational, spreadable short-form web video, and that will continue to expand as devices and users' familiarity and comfort with online video watching evolve and mature. The web, if anything, is a place for experimentation.

Sara thinks and tweets about medium specificity and other questions about technology at mediology and @smwat.