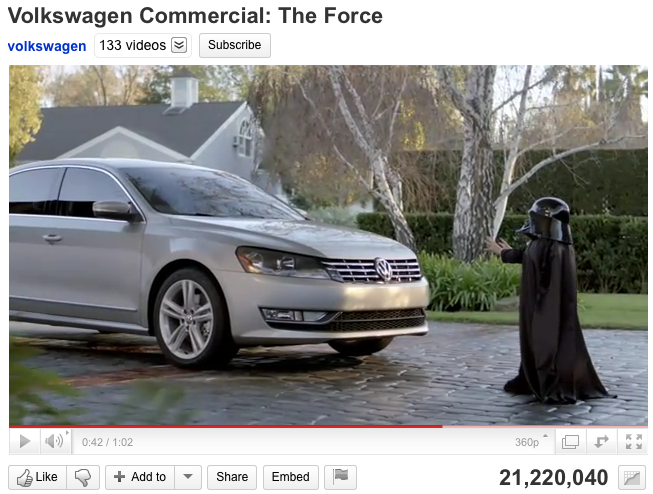 The Super Bowl is unquestionably the biggest day of the year for marketers. And this year, the event broke TV ratings records for the second year running, reaching an average audience of 111 million viewers. As many as 162.9 million viewers tuned in at some point during the broadcast, making it the most viewed telecast in broadcast history.

The advertisements are now almost as big a draw as the main event itself. With spots going for a reported $3 million for 30 seconds, advertisers are aiming to get the most out of those high-profile ads.

This year, Volkswagen delivered a quality ad backed by a promotion strategy that brought its adorable mini Darth Vader to the top of the charts. Volkswagen and a few others uploaded their Super Bowl spots to YouTube a few days in advance of the big day to generate buzz leading up to the event. Blogs and news sources picked it up, and the ad managed to go viral even before it aired on the main event. It also reached far beyond the US audience, trending for audiences in Australia, Ireland, India, New Zealand, Israel, South Africa, Spain, France, and Italy.

During the game, ads benefited from social media discussions on Twitter marked with a football on related hashtags #superbowl and #sb45. According to Brand Bowl presented by Mullen, more than 302,977 tweets were tallied that talked about brands during the four quarters of the Super Bowl broadcast. The Volkswagen ad garnered 33,930 tweets and had the highest positive sentiment ranking of all the ads. The Best Buy spot managed to bait lots of young Beliebers into talking about the ad on Twitter and is also now the top result for Bieber fans searching his name on YouTube.

After the game, marketers continue to take advantage of the wrap up coverage to extend the life of these ads. YouTube Trends blog has gathered together the 10 Most Viewed Super Bowl Ads in which the Volkswagen commercial tops the list. The Trends blog also included the initial posting date, and all except for one were posted well before Super Bowl Sunday (February 6).

YouTube is following up on the advertising buzz from the event with its Ad Blitz page collecting all the ads from the event in one place. The site was also available for the first time to mobile viewers who could rewatch their favorite ads during the game from their phones.

Hulu also compiled the advertisements that ran during the game on their AdZone Super Bowl ad ranking system that allows viewers to like or dislike an ad and shares stats broken out by demographic. The Force averaged 94% like rate on the system. Facebook offered a similar voting system on it's Sports on Facebook page which featured replays and "Like" buttons on the page.

This year demonstrated that marketers made a concerted effort to bring an integrated approach to their Super Bowl ads. They extended ad impressions before, during, and after the broadcast. Marketers are beginning to grasp the opportunity to evolve what used to be a "push" message into an ongoing conversation that takes advantage of and encourages the ongoing commentary on social networks. That 30-second spot last far beyond the fleeting broadcast moment during the biggest television event of the year.