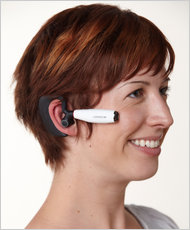 For a while now, cameras have been getting steadily cheaper as they simultaneously bring increasingly higher quality recording to the masses. From ultra-portable Flip cameras to DSLR cameras recording HD video, there are a proliferating number of options to capture beautiful video footage. As explored in a New York Times article this weekend, a new class of ultra-portable, hands-free cameras is hitting the mainstream to capture every moment, from whatever point of view —all for around $200.

As photographer Chase Jarvis says, The Best Camera is the One That's With You. Though his preferred medium is still photography, the mantra rings true for shooting moving images as well, and it becomes especially true when that camera can be used in continuous-capture mode! What kind of new footage do you would you shoot with an ultra-portable camera?